Gamepedia
Help
Sign In
Register
Dear readers and editors!
Gamepedia has joined forces with Fandom and we are considering merging The Wonderful 101 Wiki on Gamepedia into its Fandom equivalent on February 2nd, 2020,
unless there are valid objections against that process.
Please use the discussion page on the Community Portal to bring up any concerns.

Join the The Wonderful 101 Wiki on Fandom!

From The Wonderful 101 Wiki
Jump to: navigation, search 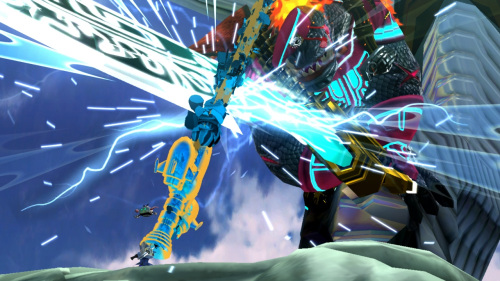 The GEATHJERK is an alien armada that invaded earth forty years prior to the start of the game. This invasion prompted the creation of CENTINEL, which combated a second invasion twenty years after the first. Incidentally, this invasion was the cause of Wonder Red's father's death. After being repelled from Earth, they are arming for a third invasion with a larger fleet, poised to strike in the skies above. Members of the GEATHJERK are listed below, and more information can be found by visiting their personal pages.

A space pirate and galactic criminal, Vorkken challenges the Wonderful 101 to duel, with interesting results. Though he starts as one of the antagonists, Prince Vorkken becomes a protagonist in short order.

Laambo is a twisted and evil GEATHJERK who loves war almost as much as he loves death. He brandishes a special sword known as the Dechno-Bo, and is a formidable enemy for any CENTINEL agent.

The Chief Scientist of the armada, Wanna is an intelligent and skilled weapons developer.

A high ranking officer in the armada, she is truly fearsome and brutal.

A Supreme Overlord with the intent of wiping out humanity and rewriting history.

Weapons of the Armada[edit | edit source]

The infantry of the GEATHJERK armada. What they lack in power, they make up for in numbers.

Highly dangerous commandos of the GEATHJERK armada, these robots are a danger to encounter.

Dough-Goo - now with parachutes! The You-Hough are the aerial infantry shocktroops of the GEATHJERK armada.

Large genetically mutated scorpion-like creatures, the Dahkats are a massive threat to all who encounter them.